A number of readers of this blog have let me know that they have adopted the UnitTestBase and DatabaseUnitTestBase classes that I originally demonstrated from the Summer of NHibernate screencast series as a simple means of facilitating their writing of unit tests.  This is great news as I’m glad others have been finding value in the library and I had of course encouraged anyone interested to try it out and adopt it if it met their needs.

These abstract base classes (from which consumers would derive their concrete test fixture classes) provide several convenience facilities that make it slightly easier for a developer to write tests that leverage the RhinoMocks mock objects framework as well as significantly easier to write tests that leverage the NDbUnit database-state-management framework when writing database-interaction unit tests (ok, technically these are integration tests, but you get the point).

Some of these conveniences are…

One of the challenges with #1 above is that this means that the UnitTest Utility Library has a dependency on the RhinoMocks framework.  Its not a huge dependency since there is little integration between the two, but when it comes to a compile-time dependency, there is no such thing as a ‘small’ dependency.  This means that when an updated version of RhinoMocks is released, an updated version of the UnitTest Utility needs to be compiled against the new RhinoMocks release.  Such was the case when the RhinoMocks 3.5 RC1 build was released and it is again the case now that the final RTM build of RhinoMocks 3.5 has been released (as was the case earlier this week).

To satisfy the needs of those that have chosen to adopt the UnitTest Utility, I have now rebuilt the library against the RhinoMocks 3.5 RTM release and am making it available for download to anyone who is interested.  (BTW, Sudarshan, this invitation doesn’t extend to you for reasons clear to anyone who ready this post from last week).

A few Goodies snuck in

In addition to simply rebuilding the utility for the new RhinoMocks release, I’ve also taken the opportunity to introduce two new additional convenience methods to the UnitTestBase class: 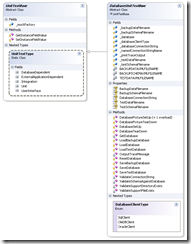 ), these two complimentary methods allow your test fixture class to use the .NET reflection API to get and set both public and private fields in any class.  While reflection is generally frowned-upon in production code as being a performance drag, using it in unit tests to either get or set values on classes under test can be extremely useful to avoid the need to create public properties on objects just to ‘inspect’ their values at test-time, or perhaps to set a private field in the same way something like NHibernate might — by bypassing any public setter logic, etc.

To be clear, good unit test techniques suggest (and I generally agree) that if you are testing the internal, non-public aspects of your classes then you tend to be writing brittle unit tests that test the wrong things, but I believe in giving developers the tools they need and then trusting that they will do the right thing with them.  And so I’m adding these two methods to the base class to support easily testing to ensure that simple things like constructor-injected dependencies end up in the right place inside a class’ private field(s).

Since the methods are internal and virtual, if you don’t like them at all then simply either ignore them or override them in your derived concrete class and fill their method bodies with code that does nothing.  Your choice.

Also, as mentioned in this post when I released the updated build for RhinoMocks 3.5 RC1, both of these downloads also contain a CHM help file that documents (pretty clearly, if I say so myself

) the entire reasonably simple API for this library of base classes so anyone interested is encouraged to download either of the packages from the preceding links to review the compiled HTML help file contents.

As always, any comments, feedback, etc. is much-appreciated.  Have fun and happy coding~!

Last reply was December 7, 2010
Previous Post: (final) Summer of NHibernate Session 14: Migrating to NHibernate 2.0 is Available
Next Post: T4 Templating Engine to the Rescue (sort of~!)