A week or so ago a regular reader of my blog and viewer of my screencasts was having a challenging time with what turned out to be a variant of one of my all-time least-favorite problems: open-source-assembly-version-hell.

Using GMAIL chat, after a time I was able to pin down his troubles and guide him to a resolution to his issue.  As this all happened early in the morning while I should have been enjoying my coffee and catching up on some blog-reading before heading off to work for the day, I’m presently ambivalent about whether GMAIL chat is in fact a good thing or not

Will Work for Food

In exchange for my helping him out, this person offered to send me a collection of Belgian Chocolates (being Belgian, its simpler for him to get ahold of such a thing than for me to do so for myself

).  Despite my pleadings that such a gesture really wasn’t necessary and I was just happy to have been able to help him out, I gladly offered up my address so that he could send me the package anyway since he was so insistent.

And who am I to decline a gift?  The only caveat was that I had to agree to do a blog post where I provided photos of the chocolate along with some documentation of my weight both before and after the chocolate.  This seemed to me a reasonable concession, so without further delay here we go…. 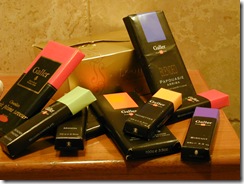 As shown in the first photo here, the package consisted of a number of individually-wrapped bars of several varieties of chocolate.  Also included as shown in the next photo was a quite large assortment of bite-sized goodies just the right shape to melt in both your mouth and your hands! 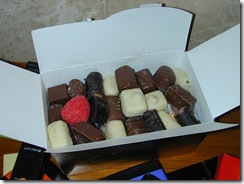 I admit to expecting a much smaller delivery than I received.  As you can see from the following photo of the airbill on the package (retouched a bit to obscure the identity of the sender), the package weighed in at a hefty 2.26kg.  And after a quick visit to Google to find a kg–>lbs converter, I have discovered that this means I was shipped 4.98244 lbs of chocolate (let’s call it a round 5 pounds in rough numbers) 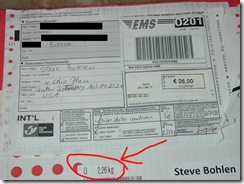 The Engineer in me wants to equate effort to reward, so if we consider that I probably spent about 30 minutes in GMAIL chat before we resolved the issue, that’s 5 lbs for 30 minutes of work or a whopping 10 pounds of Belgian Chocolate per hour!  I wonder if my company would consider restructuring my compensation package to change the currency in which they pay me from $US to Belgian chocolate…

Since I promised my chocolate provider a measurement of my weight both before and after the chocolate, here’s the before shot of the scale. 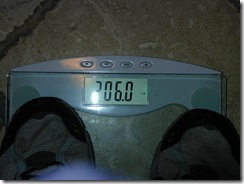 That rather convenient glare from the flash in my camera is obscuring the number ‘2’ in front of the rest of those digits indicating that my-pre-chocolate weight is a nice round (perhaps a little too round, if you know what I mean!) 206 pounds.  As you can see, I’m wearing my tennis shoes though so perhaps they are really heavy shoes that add about 15 pounds to my weight, explaining where the extra 15 pounds came from

Fortunately, my scale also displays measurements in kilograms (which, also fortunately, makes me think I weigh a lot less when I accidentally flip the switch and set it to display in kg instead of pounds when I’m groggy in the morning):

Comfortable that although I may weigh 206 lbs (with my heavy shoes on, of course), the good news is that’s only 93.1 kg and that sounds a lot better to me than 206 pounds!

Thanks to this magic of the metric-enabled scale though, its easy for me to report exactly how much more I weigh after the chocolate:

And, no, I have absolutely no intention whatsoever of reporting what that is in pounds

Flattery will Get you Far but Bribery will get you Farther

So in the end, even though I clearly indicated that I didn’t need (or expect) any ‘compensation’ for helping out resolving the issue, ‘compensation’ arrived anyway in the form of a sort of chocolate currency.

I had an exchange with one of my co-workers today that went like this:

I already spoke to <other co-worker name here> yesterday and gave him the ten-thousand-foot-overview of the project.

Knowing you, that ten-thousand-foot-overview was probably more like anyone else’s one-hundred-foot overview so I’m sure <other co-worker name here> is up to speed on the details just fine.

As anyone who has ever asked me a question, requested that I consider an idea, or come to me with a problem will (hopefully!) tell you, a big part of who I at least TRY to be is a guy that offers his advice, his experience, and his ideas when asked without the expectation of compensation or even a thank-you.

People often say to me “I don’t ask you a question unless I’m prepared to receive the answer.”  And if I cannot figure it out for you, I will at least try to point you in the right direction.

Oh, and I also accept payment in the form of scotch, vodka, tequila,  and cigars as well, in case anyone was curious and happened to not be living in Belgium

Last reply was February 3, 2009
Previous Post: The Red Queen, Learning Fatigue, The Cost of Constant Change, the Fallacy of JIT-Learning, and the Siren Call of Superficial Understanding
Next Post: The Best Way to Spend 45 Minutes