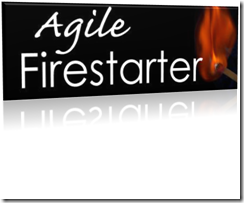 About two weeks ago, on November 13th, 2010 we finished the (re)delivery of the Agile Firestarter content here in NYC to an assembled group of about 80 interested software developers.  This is now the fourth delivery of this content, including two prior Agile Firestarters in NYC and one in nearby New Jersey.  The team involved has varied slightly over the various deliveries but for this one I was joined by Dan Berlin, Erik Stepp, Mark Pollack (my co-worker at SpringSource), and Alex Hung (who, as usual, captured the sessions on video in his usual style for those unable to attend).

I delivered two talks at the event, the first an overview of Agile concepts and principles to kick off the day and the second a (re)delivery of my Refactoring to a S.O.L.I.D. Foundation talk.  Unfortunately, these two talks ran back-to-back, meaning that the attendees were probably long-since tired of hearing my voice after the first three hours of the morning — I know I was sure tired of speaking by that point!

By most accounts, the event was a success – people seemed to get great value out of the content and provided us organizers with great feedback on what they liked and what they didn’t (which we will fold into our planning for the next event, as usual).  Hopefully the event helped to introduce another 80 people or so to the concepts, principles, and practices at the heart of Agile software development.  The event included (as usual) a mix of lecture-style content and lab exercises for the attendees, offering them both the opportunity to gather information and to apply that knowledge in group collaboration situations.

We did have a few little hiccups in the delivery of the event this time.  Our attempts to make the starter code for the lab exercises and the PDF files of the slides available to attendees via an ad hoc WiFi network ran into some technical difficulties – while we *did* size the DHCP addresses for the WiFi network property, we failed to remember that IIS on Windows XP (the OS that we just happened to have on the laptop we arbitrarily chose to host the files) limited concurrent connections to no more than 10 at a time

Oops!  Fortunately, a last-minute real-time download/install of light-weight OSS webserver enabled us to get the downloads back on track for the attendees.

Some of the feedback indicated that people wanted more information provided about many of the topics we presented at the event.  Some of this is to be expected, given that we are introducing many often-foreign concepts to people in the course of the eight hour day.  But some of this is probably in direct response to tweaks we chose to make in the schedule and content of the sessions based on feedback from past deliveries of the content.

While the overall list of topics has remained relatively fixed over the course of the four deliveries of the Agile Firestarter event, after each event we have requested (and received) feedback from attendees that has lead us to make modifications to the time-slots and depth of each of the topics.  Invariably, those topics for which we have chosen to reduce the time allotted based on past comments receive “wish you could go into more depth on this” comments the next time.  For this Firestarter, the Continuous Integration topic seemed to take the brunt of this criticism.  In the past events, the CI talk included a demonstration of a working CI server.  For this event, we chose instead to go with screenshots for CI to reduce the timeslot a bit to make room for more depth in other topics.  Not unsurprisingly, this lead to the comment “wish CI had included a demo”

Win some, lose some I suppose – everything in life is a series of trade-offs and I like to think that we tried to make the right choices…but of course we will take this feedback into consideration as we plan the agenda for the next Agile Firestarter and so we’ll probably at least consider (re)adding the demo to the CI talk again next time.  Its all a giant feedback loop and we try to learn what we can from each delivery of the content, continually refining it as best we can in each iteration, remaining true to the fundamental spirit of continuous learning at the root of Agile.

Just as we have in the past, its likely that we’ll be planning a follow-on Agile Campfire event designed specifically for past attendees of the Agile Firestarter events where attendees will get to spend an entire day working in a team setting to develop an actual working software solution along with other attendees and a dedicated agile coach to help direct their efforts.  Look for more info on this event as it approaches, but rest assured that all Agile Firestarter attendees will be emailed to let them know about the upcoming Agile Campfire event, so stay tuned for more information~!

‘Til then, happing coding~!