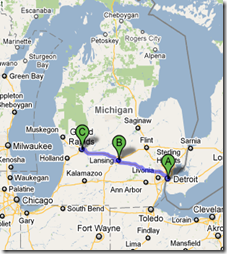 I’m in the process of putting the finishing touches on several talks that I will be giving the week of July 18, 2011 in the southern part of the state of Michigan.

Thanks to the combined financial support of the INETA Regional Speakers Program and the Telerik Insiders Program, I can afford to make the trip to visit user groups in Detroit, Lansing, and Grand Rapids later this month!

On Tuesday evening, I’ll be delivering my Refactoring to a S.O.L.I.D. Foundation talk for the West Michigan .NET User Group in Grand Rapids.  If you’re in the Grand Rapids area, I’d love to have you come out and join us and your fellow developers in the community for the talk!

On Wednesday evening, I’ll be again (re)delivering the same Refactoring to a S.O.L.I.D. Foundation talk for the Great Lakes Area .NET User Group in the Greater Detroit area. If you’re in the Detroit area, I’d love to have you come out and join us and your fellow developers in the community for the talk!  And if you’re some kind of a weird S.O.L.I.D. groupie come see the talk again tonight even if you were just at the talk in Grand Rapids the night before!

On Thursday evening I will be delivering my Introduction to Agile Principles, Practices, and Processes talk to the Greater Lansing .NET User Group in Lansing, MI.  If you’re in the Lansing area, I’d love to have you come out and join us and your fellow developers in the community for the talk!

The Last Time I Saw Michigan…

Somewhat humorously, the last time I was in the state of Michigan was over 20 years ago when I was an undergraduate at The Ohio State University and came to cheer against the University of Michigan Wolverines in what we in Ohio always called “the annual scrimmage between two teams from Ohio” (owing to the fact that usually a significant percentage of the Wolverines’ Team was made up of residents of Ohio) but whose official name is of course “the Ohio State-Michigan game at the end of the Big Ten College Football Season”.  FWIW, I’m pretty sure that the Buckeyes soundly trounced the Wolverines that cold November day, but I’m hoping the folks I see in Michigan in another week don’t still hold a grudge against me over that.  Disappointingly, some of them probably weren’t even born when I was last in Michigan so they wouldn’t be able to hold a grudge anyway!

The last time I visited the Great Lakes State I’m pretty sure that I was wearing a shirt much like this one on the left, but rest assured I won’t be bringing it with me on this trip so that I can avoid getting the shit beat out of me in the parking lot as I’m leaving the user groups each night

Of course, with the recent news on the moral and ethical collapse of the Ohio State University football program, I suspect that the Wolverines have a bit more to laugh about these days than the Buckeyes (and now I probably need to get me a brand new shirt that reads “The Fuckeyes Bucked Themselves”