Downloading and installing the DX_SourceOutliner

You can download the latest build as a ZIP file here.  Refer to this post for details on how to install, setup, etc. to use the add-in.  As mentioned in prior posts, this is an early-release ‘preview’ of this tool for evaluation and comment and is not intended for production use, USE AT YOUR OWN RISK.

Filtering by Text String is Functional

As shown in the following screenshot, toggling the filter ON and typing the beginning of the name of any element into the filter string textbox now properly performs filtering on the elements in the outline… 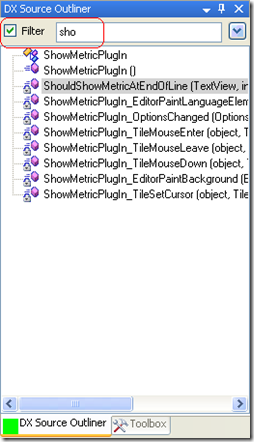 In the following screenshot, you can see that entering the capital letters that match the Pascal-Casing of the elements in the treeview now correctly filters the tree’s nodes by those identifiers that match… 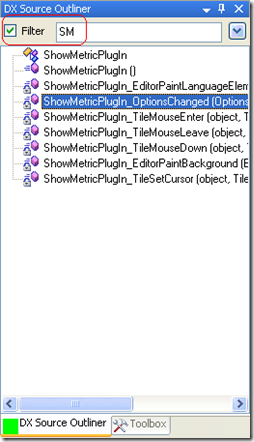 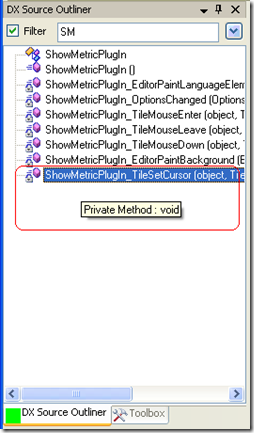 In the 0.1 ALPHA version clicking a node to expand/collapse it also had the side-effect of selecting the node being expanded/collapsed (oops!) as pointed out by Jorge Alves in this comment.  This has now been addressed.

The TODO list for the 1.0 release is (more or less) as follows now… 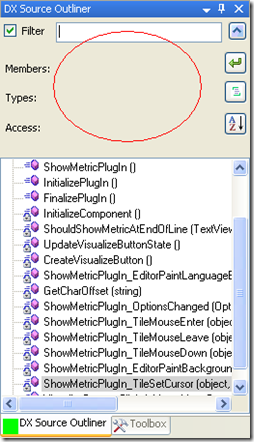 With this work remaining, its looking like this will be ready for 1.0 release by sometime this weekend, so keep your eyes peeled for a release candidate pretty soon!