I’ve just returned from a wonderful trip to the Oredev 2009 Oresund Regional Developers Conference where I was invited to present both a half-day workshop and an hour-long regular talk in the .NET conference track.  If you’re interested, links to my slides and my code samples can be found for download as mentioned in this post.

Oredev (now in its fifth year) has been a conference I have watched longingly from afar for some time.  Each year the speakers, the topics, the variety, and the creativity of content has attracted me to watch the session recordings once posted for viewing and so when I was approached and asked if I would submit several papers for consideration for the event, you couldn’t have kept me away with a stick — here was a conference I had long admired asking me to consider submitting ideas for my own presentations!

Unlike many conferences that focus in on a specific technology or area of interest, Oredev is that still that (relatively) rare thing in today’s day-and-age of narrow-casting content: the broad, multidisciplinary conference offering a diverse set of conference tracks designed to appeal to everyone.  With tracks that included .NET, Java, Architecture, Agile, Testing, Mobile, and more if you can’t find something of interest at Oredev then you’re in the wrong line of work!

At many conferences you look at the schedule and say to yourself “there’s no session that interests me this hour” but to Oredev’s credit each hour offered at least two or three hard decisions to make about which sessions to attend next!

Some of the best parts of such conferences often happen outside the confines of the actual conference talks themselves.  As seen in the following photo, this is the beginning of the collaboration to end all collaborations: Oren Eini (Ayende) and Julie Lerman beginning to discuss the challenges of wiring up NHProf (NHibernate Profiler) to work with the Microsoft Entity Framework. 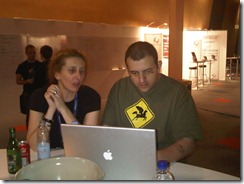 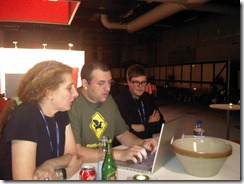 Yes, it started right there at one of the tables in the conference’s exhibition space, if you can believe it!  Later, it continued at the local pub, the Bishop’s Arms, that had been designated the semi-official off-conference watering hole for the speakers.  In the following photo, Oren struggles (ok, it was a short struggle for the likes of him!) to get the newly-born Entity Framework Profiler to intercept and display the right SQL statements on INSERT, UPDATE, and DELETE operations in addition to queries (which he’d already tackled).  Note the pint of Guinness at the ready, which just goes to show that its true what they say: “Using Entity Framework will drive you to drink!” 🙂 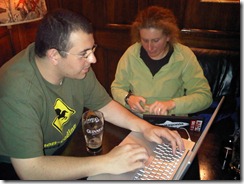 Once the Alpha build was running on Oren’s MacBook, it took three of us to figure out how to get the newly-minted EFProf integrated into the demo code on Julie’s laptop.  I’m doing my part by helping illuminate the scene with the reflection of the light off my forehead.  Note that by now Oren has switched from Guinness to a White Russian and now I’m drinking too.  Even EF tastes good with a pint of Guinness! 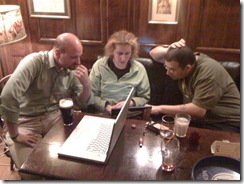 Malmo: Rebirth of an Industrial Center

Although the conference kept me pretty busy the whole time I was over there, I did nonetheless manage to explore a little of the surrounding town of Malmo.  Malmo is an interesting city in a state of transition: a former industrial center that is in the process of transforming itself into a center of high-tech innovation to position itself for the future.  The city is full of canals that criss-cross the edges of the former industrial region as you can see in the following photo looking back into the center of town from the edge of the Oresund sound itself: 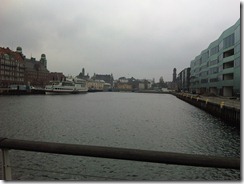 On the left of the canal you can see some of the older buildings that make up much of the city and on the right you can see a familiar sight in Malmo: the juxtaposition of newer modern architecture that houses some of the high-tech businesses that fill the city.

After the London Wheel, it appears that all European cities now need to have a large Ferris wheel for tourists, and Malmo is apparently no exception; in the following photo you can see ‘The Wheel of Malmo’ located in the town square just barely a block away from the hotel: 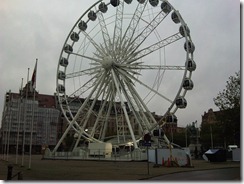 Immediately overlooking ‘The Wheel of Malmo’ is the wonderful old Malmo City Hall building where the city sponsored a welcome dinner for the conference speakers on the evening just before the conference began.  Offering a ‘traditional’ Swedish meal involving blood soup (yes, its what you think it is) along with some other interesting regional menu items, this was a great chance for the city to kick off the conference in style. 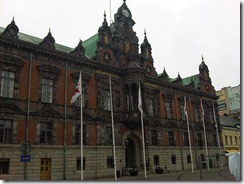 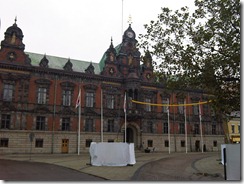 Like all good town squares, Malmo’s has a statue of someone important on a horse at its center.  The square was under some repair and so I couldn’t approach the statue to determine just exactly whom this is atop the horse, but I’m sure it was someone important 🙂 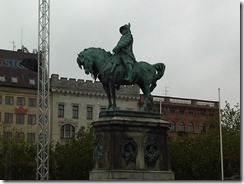 As an American abroad, I’m always of mixed opinion about the invasiveness of some canonical icons of American culture when they find their way into some otherwise odd locations.  Here we see the Malmo Burger King and McDonald’s, probably not quite what Malmo’s founding fathers had in mind when they decided to settle in this part of Sweden. 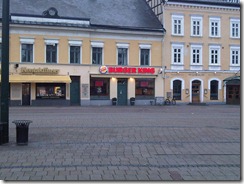 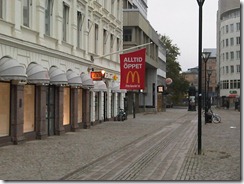 As mentioned, the area of Malmo where the conference was held has a very interesting eclectic mix of old and new architectural styles, evident even when the new architecture attempts to fit into fabric of the city by attempting to look like older architecture. 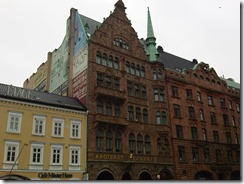 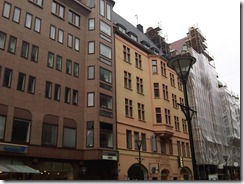 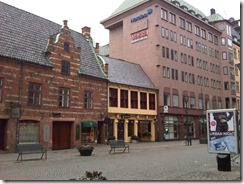 Its always good to know that companies like Price Waterhouse Coopers are everywhere, including Malmo (I guess there’s no such thing as a city that doesn’t require accountants!).  This whole office complex along the canal looks to be occupied by various white-collar businesses, helping to revive the Malmo economy and assist in its move into its post-manufacturing economic phase. 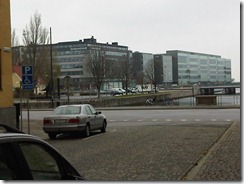 Biking in the Rain(?)

An interesting thing about Malmo isn’t the prevalence of bicycles used by the populace to get around the city – that’s a pretty common occurrence in most European towns.  But what I did find amazing was the sheer number of people who seemed to still use their bicycles as their primary mode of transport even in the driving windy freezing rain under the slate-gray-overcast-skies of southern Sweden in November.  You haven’t lived until you’ve been near-run-over by a cyclist in a parka with mittens on! 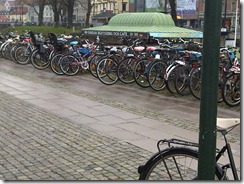 As in much of Europe, the train plays a significant role in the local transportation of the region.  Living in the highly-train-accessible northeast corridor of the United States for the past 25 years of my life, train travel is a common occurrence for me so I was right at home on the regional train system in Malmo.  This last photo comes from the inside of the Malmo Central Station train shed boarding area – a wonderful old building with some quite interesting architectural features.  Believe it or not, the vaults and the roofing in this photo are actually wooden members rather than the more common steel or iron that you might generally see in many such structures.  This wonderful old structure is like much of the rest of Malmo – an interesting (and quite effective) combination of the old and the new. 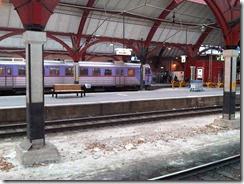 Oredev 2009 was a great experience—with luck they’ll consider asking me back so I can do it again next year!  Until then, happy coding to all~!