in a recent request for the Proteus Project, a user asked about defining test-related settings in external .config files to control connection strings settings, the location(s) of support files like the serialized dataset xml data files and the dataset xsd schema files, and possibly other things.  While it might be of value to ‘formalize’ this capability by designing an actual fixed .config file format and adding direct support for it into Proteus, it occurs to me that one of the reasons for this question may be that its not entirely clear to adopters of the framework how it was intended to allow just such extension to its behavior ‘natively’.

This post is intended to try to put some background context around the design concepts that went into the architecting of the unit-test-related parts of the Proteus Project codebase and in the process understand how we can simply extend the behavior of the library to read settings from any arbitrary location.

Digression: Note that there are effectively two halves to the Proteus Project library: the half intended to provide convenience utility methods in support of database-dependent unit testing via the NDbUnit project and the half that provides infrastructure for domain-modeling.  This post is entirely about the half related to unit testing support.

Anatomy of the DatabaseUnitTestBase Class

The core of the database-unit-testing support provided by the Proteus project is the DatabaseUnitTestBase class.

Before everyone jumps all over me for appending the ugly wart ‘Base’ suffix to a class name, this is a convention that I always use when designing abstract classes that are only ever intended to be used as a supertype from which to derive (and of course the abstract keyword helps the compiler ensure that this will be the case!).

We all still use the letter ‘I’ as a prefix for interface declarations, so get over yourselves.  Clearly we still agree as a community that some warts are acceptable!

Fundamentally, there are several underlying design ideas that characterize this class:

Its this last aspect (overridable virtual properties) that provides us the needed extensibility point for us to extend the behavior of the base class to read its settings from some arbitrary config store of our choice in answer to the issue posted to the Proteus issues list.

Design Strategy for our Extension

In order to support externally-configurable settings for the DatabaseUnitTestBase class, the first thing we need to do is devise a simple set of design ideas for our approach:

Just so that we have an idea of where we are headed, here’s a look at a sample app.config file that supports two different test fixtures in our test project: Fixture1 and Fixture2:

In this example, for tests in Fixture1 we want to use the following settings:

And for tests in Fixture2 we want to use the following different settings:

As mentioned earlier, in order to change the behavior of the DatabaseUnitTestBase class, we need to derive from it and override some or all of its behaviors (as needed).  As you can see from the following screenshot, if you type the override keyword and hit the space bar, Visual Studio is kind enough to show you all of the possible super-class methods you can override in your derived class… 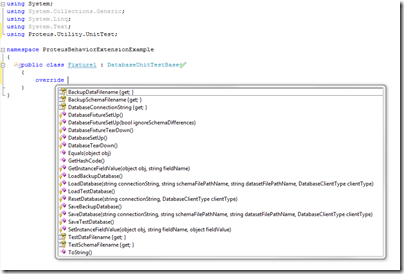 Don’t like the way the base class reads its connection string?  Override the DatabaseConnectionString property getter.  Don’t like what the library is doing in its DatabaseFixtureTearDown method?  Override the DatabaseFixtureTearDown() method and provide your own behavior.  And because overridden class elements in a derived class still have access to the underlying base class’ original methods, its entirely possible to extend and enhance the original behavior rather than completely replace it as in the following snippet:

In our specific example, in our derived class we only need to override the property getters for DatabaseConnectionString, TestDataFilename, and TestSchemeFilename so that they read the values we want out of the app.config file rather than simply performing their default out-of-the-box behavior.

Just for the record, the default assumptions of the DatabaseUnitTestBase class that we will be overriding are:

In our case, none of these assumptions the DatabaseUnitTestBase class makes is true so we must override its behavior to reflect retrieving the settings from the app.config file based on the different conventions we want from our ‘Design Strategy’ discussed earlier in this post.

So what’s an implementation of this going to look like?  Let’s take a quick look at how simple this actually is…

To get started, we can immediately see that we’re going to need a simple convenience method in our class that can get us the name of the test fixture since its effectively the discriminator in our app.config settings.

Almost an absurdly simple method, this inspects the current type (which will be the test fixture class) and returns it’s unqualified name (e.g., in the case of Fixture1, this will return the string “Fixture1”).

We bother to write this simple method none-the-less because it helps abstract out how the discriminator is determined so that if at some later point we want to bother to determine it some other way, calling code doesn’t have to concern itself with how the discriminator is actually determined.  A very simple example of this is that it might (later) be worthwhile changing the discriminator to be the entire fully-qualified typename (by returning this.GetType().Fullname instead) so that more than one Fixture1 class could co-exist in the same test assembly (but obviously in different namespaces else they would collide and the compiler would complain!).  For our example, returning the unqualified typename is fine.

Overriding the retrieval of the connection string is very simple, we just need to use the .NET ConfigurationManager class to retrieve the named connection string based on our discriminator value (our fixture name).  Now that we have our GetSettingsDiscriminator() method defined, this becomes quite simple:

Following a similar pattern, all we need to do to enable our desired retrieval of the Schema File on a fixture-specific basis is override the TestSchemaFilename property getter as in…

Following our ‘design guidelines’ of storing the fixture-specific non-connection-string settings with keys prefixed with the fixture name, we again invoke our helper method and just concatenate it onto the front of the expected appSettings key.

Unsurprisingly, we follow the same approach to overriding the retrieval of the Data File on a fixture-specific basis, overriding the TestDataFilename property to perform the same kind of operation (read from the app.config file)…

Where to Put All This?

That’s really about all there is to it.  Since the methods within the DatabaseUnitTestBase class are expressed in terms of these public properties, when the class goes about its work, it will use the overridden property accessors to read the values out of the app.config rather than using its ‘default’ values for these settings.

This leaves us with a bit of a conundrum however: since these base-class methods need to be overridden in each test fixture class that derives from DatabaseUnitTestBase, we would seem to need to reproduce all this code (even though its hardly much) in each of our test fixtures.

Inheritance to the Rescue!

Rather than going that route, I would suggest instead that all these overrides simply be refactored into a common class from which you can then inherit each of your test fixtures as needed.  In my example, I’m calling this new class ConfigDrivenDatabaseUnitTestBase as in…

I’m leaving it also abstract so that its clear (and the compiler will enforce!) that its intended to only be used as a super type from which to derive other classes.

This example is necessarily down-and-dirty and contains no error-checking or even fall-back behavior if settings aren’t found in the app.config file.  Some ideas here for the reader include…

The exception approach might make sense if you want to only use this new base class in cases where you know you will use app.config-based settings and want explicit notification when a setting is missing as in…

Since the overridden methods of base classes are still accessible to derived classes, its also possible to ‘fall-back to default behavior’ if custom settings aren’t found.  This might make sense when you want to use the new base class everywhere and then selectively override just the settings for certain fixtures that need different settings by adding them to the .config file if/when needed as in…

This second approach would permit you to use this new ConfigDrivenDatabaseUnitTestBase class as a base for all your fixtures without regard for whether you place settings for each in your app.config file.

This specific example gives just a flavor for the kinds of extensibility that are possible using the Proteus library for data-dependent unit testing.  I hope this helps clarify how its really quite simple to change the behavior of (nearly!) the entire base by deriving your own class from it and overriding properties and methods as you see the need for your specific situation(s).  Since all of the methods and properties are virtual, it should be possible to twist the class into doing just about whatever you find you need.

Obviously if there are things that this approach to derive-override-extend doesn’t support, let me know and I can look into extending the library in other ways too!