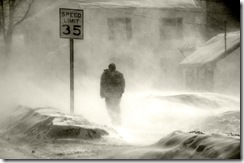 As I type this post, NYC is preparing for what looks to be anywhere from zero to six inches of snow starting at around mid-day Saturday (depending on whom you believe).

Note: the photo at left is NOT real-time, its one I found on the Internet from some storm that happened in 2007 that has nothing to do with NYC at all

As some of you will know, the 2009 NYC CodeCamp event is scheduled to start tomorrow morning bright and early at 8:00am.  Despite the dire weather predictions, this event WILL PROCEED AS PLANNED.

Weathermen Aren’t to be Trusted Any More than GANTT Charts

So far this season, despite prior dire predictions of Nor’easters we have received exactly bubkes in the way of meaningful snowfall in NYC.  So they may be right about tomorrow and they may be completely wrong, but either way canceling an event this size based solely on weather forecasts is impractical (and possibly irresponsible) so we’re sticking with it and moving forward as planned — weather be damned.

It takes much more than the threat of a few inches of snow to put the kibosh on an event in New York City.  That said, since the surrounding suburbs often get more snow than the city-proper and a lot of both CodeCamp attendees and speakers live in the suburbs (and even father away in some cases), there’s no shame in deciding its best to stay home where its 100% safe.  The rest of us will have a nice snowy CodeCamp.

Hope to see you there tomorrow if you signed up~!